Over the next several weeks, we’ll be providing comprehensive betting previews for every major event ahead of the 2020 Summer Games in Tokyo, which will run from July 23 – August 8. This edition focuses on the rugby competition, which will be held July 26-31 at Tokyo Stadium.

As a former resident of the great nation of Australia, the sport of Rugby is near and dear to my heart, and Sevens is shaping up to be one of the most exciting, fast-paced events in the Tokyo Olympics.

In 2016, the first year Rugby Sevens was an Olympic sport, the Fijian men captured Gold, continuing their dominance in the sport regardless of whether the format was for 15 players or seven. They’re back as the odds-on favorites in Tokyo. They defeated Great Britain in the title match, and the South Africans took home Silver. Aside from New Zealand (second-best odds this year) and Australia (fifth-best) not reaching the podium, the men’s side was quite chalky in 2016, but don’t expect the same this time around.

On the women’s side, the Australians won Gold in 2016 over arch-rival New Zealand. The Silver Ferns are out to avenge their defeat from 2016 and enter the tournament as heavy, heavy favorites (-335). The Canadians took home Bronze last go-around and are slated to do the same in Tokyo, possessing the third-best odds to win it all. 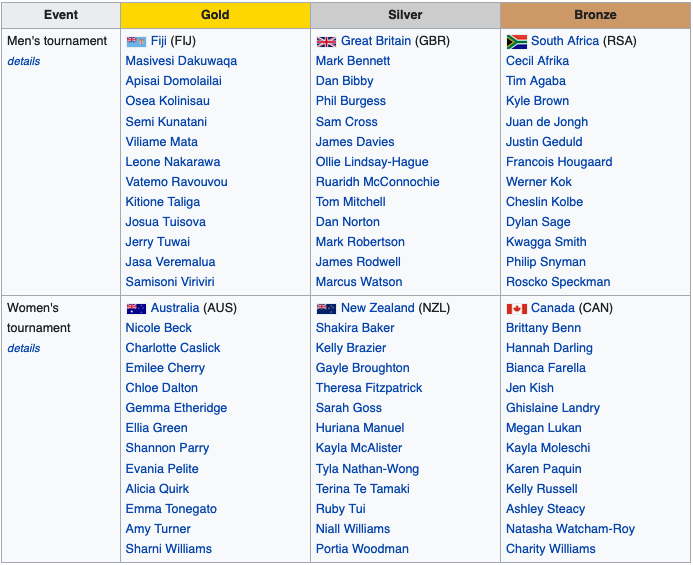 Why Should I Bet On This?

Take my word for it. Rugby is a fantastic sport. And this is Rugby Sevens, a modified, quicker version of the violent, pad-less game of rugby we’ve all come to know from afar. It’s exhilarating to watch, and if you’ve got money wagered on it, it feels as close to a football game as we’re going to get for a few weeks.

You should also bet on Sevens because there is a ton of value on underdogs. Not just in the futures market, but game-to-game, because games are so quick. Sevens matches are just, you guessed it, seven-minute halves with seven players on the field for each team. And it’s played on a regulation-sized pitch. There’s a ton of room to score points, and the games are so lightning-fast, there’s constant action and plenty of live betting opportunities.

5 Things You Absolutely Need to Know

New Zealand Men (+250): For my money, the Kiwis are the premier men’s side, but they’re not the favorite: Fiji is, and I think that’s because the market is flooded with blind bets on the reigning champions. The only deficiency for New Zealand is their style of play; in normal rugby, they love to get in your face and bruise their way to titles. But in Sevens, that’s much less possible. I don’t anticipate that being too much of a deterrent here, as New Zealand has the most balanced roster in the field. Plus, New Zealand is everyone’s rival. They’ll get everyone’s best shot, and it’ll have them in top form for the medal matches.

Australia Women (+750): The Aussies have the second-best odds to capture Gold on the women’s side… at +750! The New Zealand team is a heavy favorite (-335) and is clearly out for revenge, but these odds on Australia are impossible to pass on. Ellia Green, as previously mentioned, will rack up points, and Charlotte Caslick will be the squad’s Swiss Army knife.

South Africa Men (+340): South Africa is the reigning Bronze medalist, and many believe they should have been standing higher on the 2016 podium. This team is lightning-fast and is going to be a real problem for opponents on a wide-open pitch. They’re definitely worth a play at over 3/1 odds.

Australia Men (+900): The Wallabies didn’t earn a medal in 2016, and you can believe they’re going to do everything they can to avoid back-to-back Olympics without a spot on the podium. They’ve got New Zealand in their group, which is obviously a hurdle but also the reason why we’re getting such strong value on them. As I mentioned in the open, don’t be scared off by underdogs in this sport. The gap is closer than the odds indicate in such a fast-paced game.

USA Men (+750): I know this is tough to believe, but the US has a great Sevens team. Carlin Isles and Perry Baker are two of the best players in the men’s field, and they’re both on Team USA. The Eagles’ group is also favorable; they’ve got South Africa – the third-favorite – and avoided Fiji, New Zealand, and Australia.

Canada Women (+1000): The women’s field is really top-heavy, but the Canadians hold value at 10/1 as the best team in their group. They’re in a group with France, as well as Fiji and Brazil, who have the longest odds of any team in the competition.

Great Britain Men (+1400): The surprise Silver medalists from 2016 come in at sixth-best odds in the men’s field. They’re in Fiji’s group but are by far and away the second-strongest team of the four. At +1400 now, and probably better odds at some point live, this is a great one to monitor.

USA Women (+1400): The US, despite being a longshot, is the second-best team in Pool C. They’re behind the Australians, but as previously mentioned, this sport is so quick that underdogs come out on top often. The US has a real opportunity to overtake the Australians, and this is a great price to back them at if their momentum takes them even further.

Argentina (+4400): This is a pure value grab. I don’t think Argentina has much of a shot at Gold, but I also don’t think they should be +4400. I anticipated something around +3000, so I’m willing to look at Argentina, despite a brutal draw in pool play.

Men’s event: New Zealand is not the favorite, but they should be. This team has the most complete roster, and they’ve got serious revenge on their mind after not even medaling in 2016. I’m taking New Zealand to win Gold at +250, but if you fear another dominant performance from the Fijians, pivot to New Zealand to medal. Odds aren’t yet posted, but it should be at or slightly below even money.

Women’s event: This is an easy one for me. New Zealand is -335, and of course, there’s absolutely no value left there. In a sport where upsets are common – take it from this very same Wallabies squad in 2016 – +750 is way too much value on the second-favorite in the field. They’ve got two legitimate stars – two of the best players in the field, as a matter of fact – and will not go away quietly. Australia +750 to win Gold is my favorite pick on the women’s side.