A Guide to NBA Live Betting

If one were looking to place a wager on an NBA game before it started, there are limited options available. Sure, there are more to these bets than the typical against the spread, moneyline, and totals wagers. Various sportsbooks offer a wide range of player and team prop bets. However, sometimes these lines do not get posted until a couple hours before tip-off, leaving bettors with a small window of time to place their bets.

Live betting is becoming more popular, especially now that it is so easy to make bets in seconds on a mobile phone or app. In this article, we explain the various options related to live betting, and strategies to focus on particularly when it comes to NBA live betting.

What is a Live Bet?

A live bet is a bet that you can place after an event has already begun. Sportsbooks will constantly adjust their odds, depending on how the game is playing out.

Live betting is not just for people who are late to place their pregame wagers, however. Many bettors strategically choose to wait to place their wagers because they prefer to witness the flow of a game.

The timing of a live bet is very important. Some sportsbooks update their live odds after every basket or missed shot. If live betting is something you think you would be interested in, I suggest tracking a sportsbook’s live bets on their app or on their odds boards in person. This will give you a sense of just how quickly the odds can change.

What are Examples of Live Team Bets? 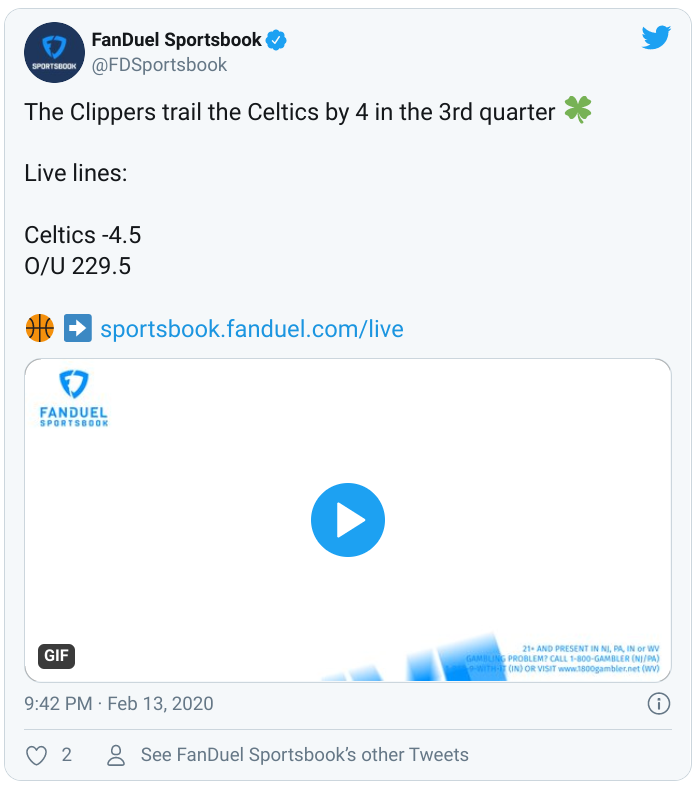 Before the Clippers-Celtics game tipped off, the Celtics were favored by one point, and the game had an over/under of 228. Since the Celtics were already winning by four points in the third quarter, the live line adjusted to Celtics -4.5. The over/under was similar to the opening line because the teams were on pace to score close to the originally predicted total.

In addition to spreads and totals, there may be interesting live team props to take advantage of. For example, some sportsbooks offer bets like the winning margin of victory. These bets differ from ATS wagers since you are offered a range of points which your team needs to win by. The payouts are often far greater than a standard against the spread bet.

There are also options like live team totals, meaning an over/under of how many points a team will score. Unfortunately, hardly any sportsbooks offer live odds for player props so be sure to get those bets in before tip-off.

There is a common saying that in the NBA, “everyone makes a run.” The meaning behind this saying is that teams that often find themselves down big early often erase those deficits rather quickly. This is not to suggest that every game in the NBA is close. Rather, it is a caution to not turn off your television if a team is in an early double-digit hole.

Since coming back from large deficits is common, oddsmakers typically take this into account when setting live odds. For example, say the Bucks fall down by double digits early to the 76ers. Even though the deficit may be more than ten points, one might see a live line such as Philadelphia -1.5. This is especially true if the Bucks were favored to win the game before the tip-off.

The first strategy when it comes to NBA live betting is do not automatically assume that a team winning big will go on to win big. Sometimes leads balloon quickly because of substitution patterns, meaning some teams rest their stars earlier than other teams. However, when the best players are re-inserted back into the game they propel their teams quickly.

Another thing to keep in mind is a team’s schedule. For example, if a team trails by a lot late in the game but has another game the next day, that team is less likely to go all out to mount a comeback considering they have a short turnaround. Conversely, the winning team in this situation might “take their foot off the gas” and try to steal minutes from their bench late in the game if they are playing the next day. Thus, it could lead to a late run and a subsequent “backdoor cover” by the trailing team.

There are two major things to keep in mind regarding live bets on over/unders. One is the fact that second halves are usually always higher scoring than the first half. In the second half, teams that are trailing often foul late to extend games and maximize possessions. Also, teams that are winning often play softer defense down the stretch as they are afraid to foul and give the trailing team an opportunity for easy points.

However, these scenarios will usually only happen if a game is tight down the stretch. If you feel a live total is inflated because of the probability of late scoring yet one team has a big lead over the other, the under is likely to be the smarter bet.

When making live bets, especially ones related to totals, always keep the pre-game odds in mind. One should never make a live bet without knowing what the game’s numbers were before tip-off. Knowing the pre-game odds gives bettors a frame of reference for what the oddsmakers are basing their new odds off of.

There is also a saying that “Vegas always knows.” More often that not, a game lands relatively close to the original odds. Thus, if a game has an opening over/under of 220 and you see a live total significantly less than that, take a look at a live bet on the over regardless of how a game may have started.