Back around the time spring training was canceled in March, we offered our best bets for who would win the 2020 World Series. Both of those selections look just as solid today as they did back then. According to FOX Bet, from whom we used for our preseason odds, the Los Angeles Dodgers have stayed steady, dipping slightly from +375 to +380. However, oddsmakers love our preseason pick of the Tampa Bay Rays, as their odds have improved drastically from +2000 to +1500.

Now that most teams who have not been impacted by the pandemic have finished roughly one-third of their schedule, it is a great time to circle back and revisit our World Series predictions. There is no reason to move off the initial predictions of the Dodgers and Rays at this point. However, after the sample of baseball we have seen thus far, a new contender has emerged that we cannot wait to add to our futures wager. 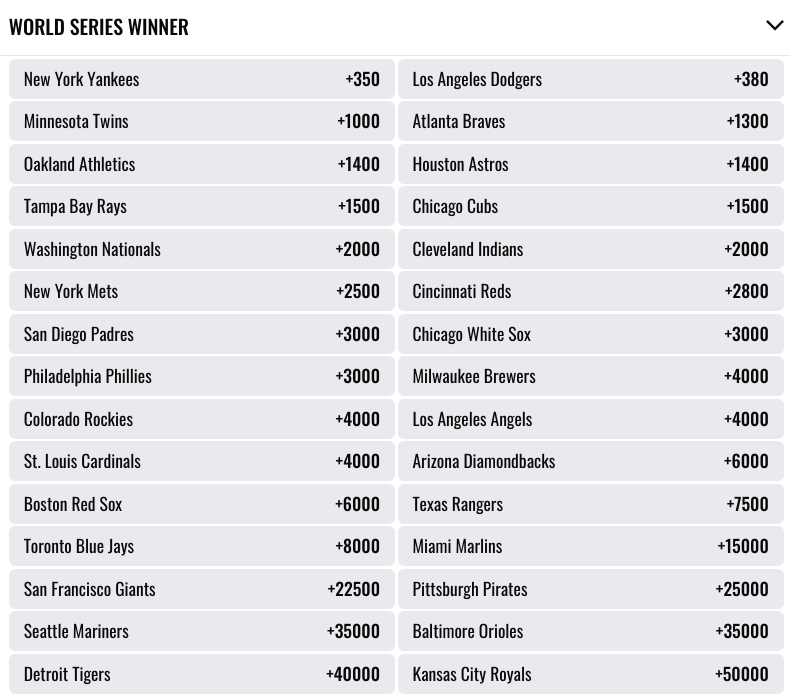 The fact that the Chicago Cubs can still be had at +1500 odds to win the World Series is an absolute bargain. At 13-3, they own the best record and winning percentage in all of baseball. According to the updated odds from FiveThirtyEight, the Cubs have a 75% chance to win the NL Central and a 97% chance to make the playoffs. Let’s take a look at what they have done to earn baseball’s best record thus far.

The Cubs rank in MLB’s top 10 in on-base percentage, slugging percentage, and OPS. They are seventh in the majors with 5.19 runs per game.

Though just two Cubs (Jason Kipnis and Ian Happ) are hitting over .300, they possess one of the majors’ more balanced lineups from 1-9. Nine players thus far have multiple home runs, and their leading RBI man Jason Heyward consistently bats at the bottom of the lineup. Plus, the Cubs are a disciplined bunch and love to grind out at-bats. Their hitters lead the MLB in 4.2 pitches seen per at-bat, which is a great formula to get to one’s bullpen quickly.

Chicago has cleaned up its baserunning considerably this season. After leading the league for two consecutive seasons in outs made on the basepaths, the Cubs’ baserunners have been thrown out just three times in 15 games.

Lastly, it is not like the Cubs have feasted on an easy schedule thus far. Outside of five games against the Pirates and Royals, the Cubs have played the Reds and Brewers, whom many predicted would challenge for the NL Central division. However, their most significant victories came Tuesday and Wednesday against the Cleveland Indians, as their hitters got to a pitching staff that had been lights out.

Cleveland pitching allowed 4 runs or fewer in 17 straight games to start the season.

Then the Cubs came to town. pic.twitter.com/U67xSHVzGE

In order for the Cubs to have the best record in baseball thus far, their hitting alone could not have gotten them there. Chicago’s starters have also been tremendous to start the season.

Kyle Hendricks, Jon Lester, and Yu Darvish are a combined 8-2 with a cumulative 2.14 ERA. There was concern coming into the season that their ages would catch up to them. But in a 60-game shortened season, that is not likely to manifest itself as much as some had predicted. They are currently one of the league’s most formidable rotation trios and are every bit as capable of dominating in the postseason, much like Max Scherzer, Stephen Strasburg, and Patrick Corbin did for the 2019 World Series champion Washington Nationals.

Speaking of the Nationals, the 2020 Cubs are already drawing comparisons to last year’s champions given how poorly their bullpen has performed. The Nationals showed last year that one can overcome a historically bad relief pitching, as they triumphed despite a 29th-ranked bullpen with a 5.68 ERA. That should make Cubs fans feel slightly better about their 28th-ranked bullpen that has a 6.47 ERA.

Based on what we have seen so far from the 2020 season, overall health and off-the-field discipline matters just as much as the players’ approach to the game. The St. Louis Cardinals have played just five games this season because of a coronavirus outbreak in their clubhouse. Meanwhile, stories like Cleveland pitchers Mike Clevinger and Zach Plesac getting sent home for violating team protocols must be disheartening to their teammates and fan base, to say the least.

However, the Cubs are a veteran-led team that appears laser-focused on doing the right thing, taking care of their bodies, and showing up to work with a professional approach. One of my biggest concerns about the Cubs heading into the season was David Ross’s lack of managerial experience. Thus far, Ross seems to have total command and respect of his clubhouse, and it is paying huge dividends on the field.

With the playoff field expanding to 16 teams, that seemingly hurts the dominant favorites like the Dodgers and the New York Yankees, as they now must win more games to reach their ultimate goals. It was only four seasons ago that the Cubs ended their 108-year World Series drought. With much of that team’s same nucleus still on the 2020 roster, the Cubs are being overlooked and are a great value at +1500 to win the franchise’s fourth World Series.