Last week brought us a mixed bag, going 1-1 on the weekly plays. However, this week, we feel good about our selections, finding a few plays where our models match our subjective gut (the “holy grail” for handicappers). So let’s jump right in.

The once “ultra-reliable” Pat Mahomes/Andy Reid-led Chiefs have frustrated prognosticators throughout the year. However, they are still the Chiefs and have a QB that can/should win any game he plays.

The apparent issues with the club come down to the impression that Pat Mahomes is “down” this season. And when you look at traditional stats and even some surface-level advanced numbers, it’s fair to reach that conclusion. Here’s how his numbers compare to last season’s:

However, when you look deeper in the advanced stats, Mahomes isn’t as “down,” as much as it is his performance when pressured (a very volatile stat) is “down.” Take a look at the table below:

When comparing the two, 2021 vs. 2020, here is how all that breaks down in terms of “how pressure affected Mahomes performance THIS year, vs. last”:

To summarize, Mahomes is fine and the same elite QB we’ve known. His overall stats are simply affected by a “non-sticky” variable that tends to flatten over time. And knowing that “the Chiefs are still the Chiefs,” and the only issue has been Mahomes when pressured, looking at PFF Rankings that have the Raiders as the #1 Pass Rushing Unit may lead you to worry about his performance in this game. However, we see it a different way: 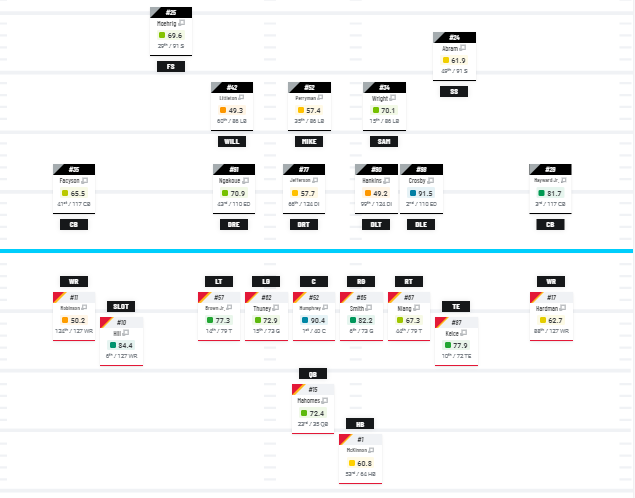 Using this visual, thanks to our friends at PFF, shows there shouldn’t be MUCH that the Kansas City OL can’t handle, with one exception: Maxx Crosby, PFF’s #2 rated DLE. At first glance, you may worry that Chiefs RT Lucas Niang can’t handle him, given his 59.1 Pass Blocking grade, but much of that grade is bogged down by early-year difficulties by a young O-Lineman making his first NFL snaps. The slow learning curve by OL has been a well-documented phenomenon in the analytics community. And this very thing is what we’re seeing with Niang, as the last two weeks, he has posted a very respectable 75.1 and 77.4 Pass Pro Grade.

Knowing all this, we feel the issues haunting the Chiefs will either be neutralized by learning curves, or simple variance, that it feels like a gift to get the Chiefs with less than a field goal worth of points.

Both teams come into this game pretty close in rank, by PFF (15h and 16th) and Football Outsiders (20th and 19th) rankings. Yet when you dive a little deeper, you find a few intriguing advanced matchup splits to consider. To start, the Eagles’ QB is one of only a couple of QBs that year-over-year has shown a consistently better performance vs. zone defenses. This year, according to the SIS Datahub, Hurts has averaged .24 EPA/play vs. Zone defenses, but .03 EPA/play vs. man. That’s almost an 8x bump to performance vs. zone. Yet, the Broncos run one of the most “man-heavy” defenses in the league.

On the other side, this season, the Eagles’ defensive identity has been: Heavy Middle-Field-Open (MFO or two safeties split deep, instead of one deep S), and sit back in zone to keep everything in front of them. Well, it turns out Broncos QB Teddy Bridgewater has an unusual split: 56% Success rate vs. MFC/Single High Safety looks, but a 45% success rate vs. MFO/Double High S looks. This could mean trouble for Teddy and the Broncos’ offense. Additionally, Teddy has an odd split, performing BETTER when blitzed (44 % vs. 57% success rates) than rushed by only 3-4, yet the Eagles don’t blitz (26th most). All of this leads me to believe this may be a defensive ball game.

To be fair, we have gone to this well a few times this year, with varied success. However, our model is very strong on this selection in week 10, especially given the EV with a +105 bet.

Our model has Justin Herbert at the 3rd most likely QB to throw an interception this week. The reasoning comes down to a few key markers, starting with his archetype (thanks to NFL next-gen stats):

Herbert is a marginally aggressive thrower (into tight windows) that holds on to the ball yet hasn’t (relatively) chucked it deep. Given that, and a bad CPOE lends to a likely interception. But when you add that the Vikings come in with a +12 Net Pass Rush Ranking Advantage (see table below, thanks to PFF), that pressure aids in a high likelihood interception projection.

Finally, when you mix in the Vikings’ 5th rated coverage unit, you can see a recipe for at least one pick this weekend.

Ryan Newman is a featured writer at BettingPros. For more from Ryan, check out his archive.