One of the most common NFL futures bets is wagering on who will win each division. It keeps bettors entertained all season long and has the potential for decent returns in some cases.

At BetMGM, the odds to win the AFC East division is likely to entice some bettors. It is one of just two divisions where every team has odds of +110 or higher.

However, there are sure to be some bettors that have their sights set on even higher payouts. BetMGM offers many creative futures bets on each NFL division that pay out much better than odds of +110.

One such example is wagering on the exact order of finish for all AFC East teams. These odds start at a minimum of +400, which means a great payday may be lurking at the season’s end.

Let’s take a look at BetMGM’s odds for the AFC East exact order of finish, and offer our best bet for the upcoming season. 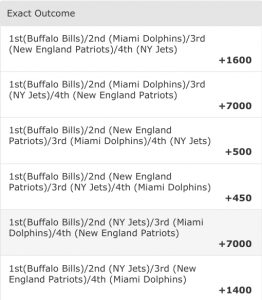 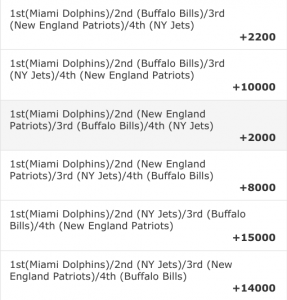 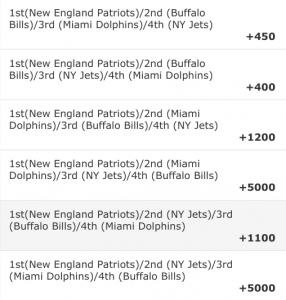 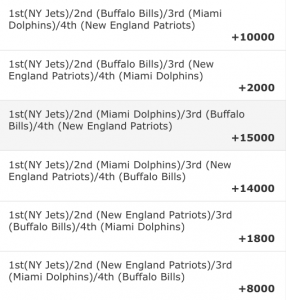 For the last 17 years, betting on any other team except the New England Patriots to win the AFC East has been a losing proposition. In that span, only the Dolphins in 2008 have taken the AFC East crown away from the Patriots. However, Tom Brady is no longer in New England and this will signal a “changing of the guard” in the division.

While there are many question marks on New England’s roster, the Buffalo Bills enter 2020-21 with as few question marks as you will find around the league. Buffalo added playmakers to support Josh Allen’s progress, most notably trading for wide receiver Stefon Diggs. They also drafted Utah running back Zack Moss in the third round. His young fresh legs should prove to be an upgrade over the aging Frank Gore while serving as a nice complement to Devin Singletary.

Buffalo’s defense was rock solid in 2019, finishing third overall in the league. They surrendered the fourth-fewest passing yards in the league and added depth in the secondary in Josh Norman and E.J. Gaines. Perhaps the biggest criticism of the Bills defense is their lack of a consistent pass rusher. However, as a whole, the defense finished 12th overall in sacks last year. The Bills hope second-round draft pick AJ Epenesa develops into a consistent pass rusher off the edge.

Why the Patriots will finish second

New England made a big splash last week signing free agent and former MVP Cam Newton. The signing has sparked a lot of optimism, as New England’s Super Bowl odds increased from +2500 to +1900.

While it made perfect sense for the Patriots to sign Newton, I am not convinced this makes them AFC East favorites. There is a reason so many teams passed on signing Newton for so long. He brings a significant amount of injury risk, and it remains to be seen if he is fully recovered from shoulder and foot injuries that plagued him the last two seasons.

Even if Newton is close to 100%, he does not have the greatest supporting cast around him. The fact that the Patriots were able to win 12 games last year was nothing short of a miracle. New England wisely shortened games and relied on their defense to grind out many wins. That is a dangerous formula and one that cannot be expected to be sustainable, especially after the greatest quarterback of all-time has left town.

The Dolphins-Jets for 3rd and 4th debate

While the Bills and Patriots are considered “locks” by many to finish in the top two of the division, bettors need to decide who will finish better between the Dolphins and Jets. I lean to the Dolphins for a couple of different reasons.

After a miserable 0-7 to last season, Miami finished strong winning five of their last nine games. The Dolphins could have mailed in the season, but they played hard for head coach Brian Flores.

The opposite seems to be true in New York. Star safety Jamal Adams wants out of town and demanded a trade. In addition, there seems to be a disconnect between Le’Veon Bell and head coach Adam Gase. The chemistry in New York has me worried entering the 2020 season, and a last-place finish is not out of the question.

According to the oddsmakers, the Jets have a better chance to finish ahead of the Dolphins. This is likely because the Dolphins drafted Tua Tagovailoa and may make him the starting quarterback before year’s end. However, I believe Miami will bring Tagovailoa along slowly and make sure he is fully recovered from his injuries sustained in college. The Dolphins will likely look for one more year out of veteran Ryan Fitzpatrick while Tua learns the system. Given how well Fitzpatrick played down the stretch last year, there should be no rush in getting Tua on the field.