One of the most common NFL futures bets is wagering on who will win each division. It keeps bettors entertained all season long and has the potential for decent returns in some cases.

While some division races figure to be wide open entering the 2020-21 season, others appear to have clearly defined favorites. One division race that figures to have a clear front runner is the AFC North. At BetMGM, the Baltimore Ravens have a whopping -200 odds to win the division. Thus, one would need to lay a lot of cash in order to win decent money making this wager.

Thankfully for bettors who do not mind getting a little more creative, BetMGM is offering odds on the exact outcome for every division. Thus, if you can accurately predict who will finish first all the way down to fourth place, a much heftier payday is in the cards. When the “favorite” for such a bet has +190 odds, as is the case with the AFC North, you know it is one that bettors should look into.

Let’s take a look at BetMGM‘s odds for the AFC North exact order of finish, and offer our best bet for the upcoming season. 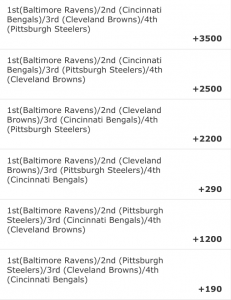 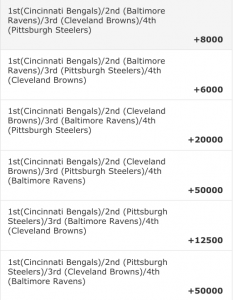 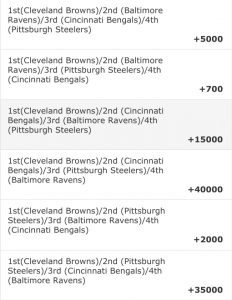 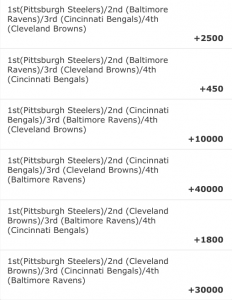 The Baltimore Ravens dominated the AFC North last year. They rolled to a 14-2 record and won the division by six games. The six games were the biggest margin in any division. What will Lamar Jackson do for an encore after an MVP campaign in his first full season as the starting quarterback?

The rest of the league has been put on notice as the Ravens arguably got better this offseason. Baltimore’s defense appears loaded entering 2020-21. The Ravens traded for Michael Brockers and Calais Campbell. In addition, their re-signing of cornerback Jimmy Smith allows their secondary to remain mostly intact from a year ago. That is a good thing, as their passer-rating allowed to opposing quarterbacks ranked second-best in the league last season. Lastly, the Ravens addressed a big need at middle linebacker by selecting LSU’s Patrick Queen with the 28th overall pick.

The Ravens are coming off a season where they finished top four in both total offense and total defense. Their top-ranked rushing offense finished 62 yards per game better than the next best team.

The only thing I see that could prevent the Ravens from winning the division again is a Lamar Jackson Madden Curse. Outside of that, their offense returns mostly intact, with the exception of guard Marshall Yanda’s retirement. John Harbaugh is one of the league’s best coaches, and the continuity among the Ravens roster will bode well for them in what will likely be a compromised offseason.

The Bengals are a Lock to Finish Fourth

Now that one piece of the dominoes seems in place with the Ravens finishing first, it is time to focus on what appears to be another lock. The Cincinnati Bengals were “rewarded” for a miserable 2-14 season with the chance to draft quarterback Joe Burrow No. 1 overall. The Bengals benched longtime starter Andy Dalton after an 0-8 start, and they spent the second half of last season seeing if Ryan Finley could be their quarterback of the future. The answer it appeared was a resounding “no.”

While Joe Burrow is coming off one of the most prolific seasons in college history, he alone will not be able to elevate Cincinnati to anything but a fourth-place finish in the division. Yes, it will help that star receiver A.J. Green figures to be healthy this year. But the fact remains Cincinnati ranked 26th in total offense and 29th in total defense last year. This roster is still too thin and the rest of the division still too deep to envision anything but another last-place finish for the Bengals.

The Steelers-Browns for 2nd and 3rd debate

This is likely to be the only true “question” in the division this year. The oddsmakers agree as the two scenarios where the Steelers and Browns finish second and third are the two best odds for this prop.

On paper, not many would question that the Browns have the more talented roster. Jarvis Landry and Odell Beckham Jr. are one of the most formidable duos of receivers in the league. Nick Chubb just rushed for the second-most yards last year, finishing 46 yards behind the leader Derrick Henry. Lastly, Cleveland’s quarterback is 13 years younger than Pittsburgh’s and is not coming off an injury to his throwing elbow.

However, talent “on paper” does not necessarily equate to wins on the field. Though the sample size is small, Cleveland’s talent does not appear to mesh well and there is little cohesion in the locker room. Perhaps that is the fault of head coach Freddie Kitchens who was fired after one disappointing 6-10 season. The task of bringing this group together and getting the most out of their talents lies with Kevin Stefanski, who has no prior head coaching experience.

For my money, give me the head coach who has been with his team since 2007 and who commands the utmost of respect. Mike Tomlin’s Steelers have not finished worse than 8-8 since he arrived. In fact, you have to go all the way back to 2003 to find the last time Pittsburgh finished under .500.

The Pittsburgh Steelers have been nothing but a model of consistency. Though they finished 8-8 last year, that feat sounds even more remarkable when considering they spent 14 games with Mason Rudolph and Devlin Hodges under center. Under this year’s current 14-team playoff format, the Steelers would actually have been the seventh seed. Their defense is rock solid, Ben Roethlisberger is back and healthy, and they are simply more dependable than the combustible Browns.