While betting division winners has always been one of the NFL’s most popular futures wagers, bettors in some cases cannot justify the rewards given how many variables go into such a wager. That is likely to be the mindset with many bettors regarding how they view the NFC East in 2020. Most will have the division title narrowed down to the Dallas Cowboys or Philadelphia Eagles, but neither provide great payouts on a season-long bet.

What if you took a shot at not only picking the winner of the NFC East but also who would finish in second, third, and fourth place? The good people at BetMGM have made this available as part of an interesting “exact order” prop. If you can identify one of 24 possibilities of how the division will finish, bettors can reap the benefits of a much higher payout.

Let’s take a look at BetMGM’s odds for the NFC East exact order of finish, and offer our best bet for the upcoming season. 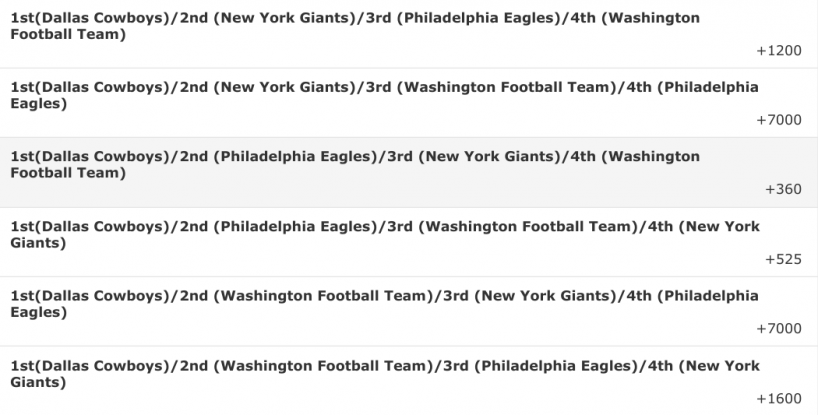 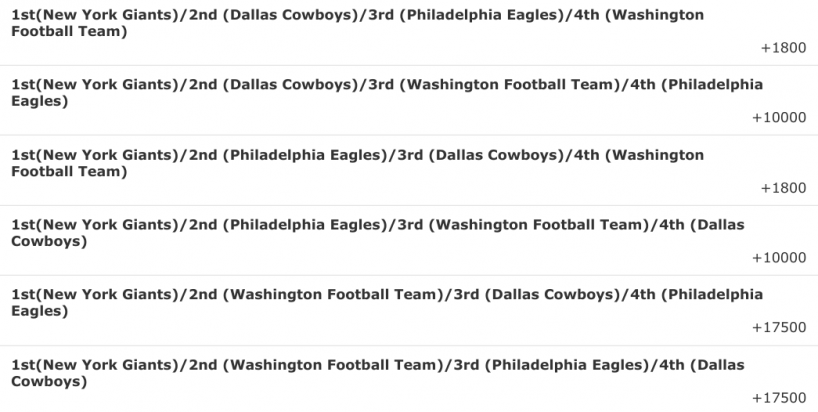 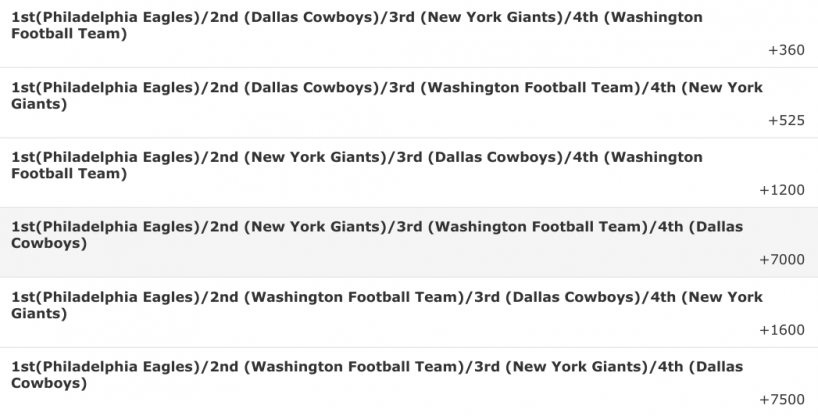 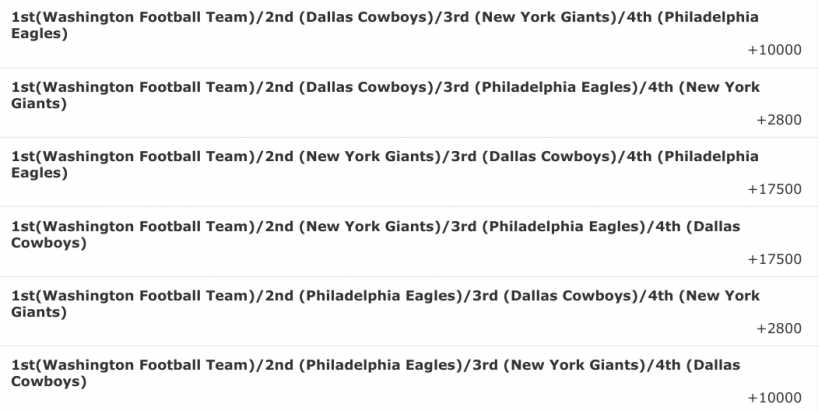 The Dallas Cowboys and Philadelphia Eagles once again look like the class of the NFC East entering 2020. Between them, they have won six of the last seven division titles and have alternated winning two apiece in the last four years. While the New York Giants and Washington Football Team appear to have good building blocks for future success, they are also breaking in new head coaches because of the prior coaches’ failure to generate consistency.

Speaking of breaking in new coaches, the Cowboys are the third team in the division to be doing so. However, they are the only team employing a head coach that has hoisted the Lombardi Trophy. Mike McCarthy will look to get as much out of quarterback Dak Prescott as he did out of Aaron Rodgers in his time in Green Bay. Prescott should be plenty motivated this year as he failed to agree to a long-term deal with Dallas, instead signing a one-year franchise tender. Thus, a big year from Prescott this year should result in a huge payday next offseason.

Prescott is certainly surrounded by enough talent to lead to a big year. Just ask ESPN analyst Field Yates what he thinks about Dallas’s offensive personnel.

Eagles backers entering 2020 are likely to be encouraged what the team was able to accomplish despite a slew of ongoing injuries.

Carson Wentz in 2019 without BOTH DeSean Jackson/Alshon Jeffery

No one did more with less. pic.twitter.com/57daMFw3Hd

However, it is still concerning that they will begin this season without Alshon Jeffery (PUP list) and a 33-year old DeSean Jackson who played in just three games last year. The drafting of TCU speedster Jalen Reagor will help their offensive firepower, and Darius Slay was a great trade piece to add to a depleted secondary.

Despite the coaching changes in Dallas, there is more to trust with the Cowboys than the Eagles. Though the Cowboys lost Robert Quinn, Maliek Collins, and Jeff Heath in the offseason, they are replaced by two former All-Pro players in Gerald McCoy and Dontari Poe. In addition, they added safety Ha Ha Clinton-Dix on a one-year contract. Meanwhile, the losses of veterans Jason Peters and Malcolm Jenkins are big losses not only on the field but in their locker room as well.

In addition, the Cowboys are also due some regression to the mean in the close-game department. Two years ago, Dallas was 8-2 in games decided by seven points or less. In 2019, they were 0-5 in those scenarios. Given that they lost the division by just one game last year, it is safe to say they do not have much to overcome this year if a few more bounces go their way.

With the Cowboys and Eagles locked into first and second place, we come to the next NFC East conundrum: what to do with the Giants and Washington? Last year, Washington “won” by finishing 3-13 which was one game worse than the Giants. That earned them the right to the No.2 pick and the ability to select defensive end Chase Young. While the Giants believe they drafted their offensive tackle of the future in Andrew Thomas, he does not project to be the transcendent talent that Young appears to be.

The Redskins appear to have many advantages over the Giants heading into 2020. Their defense and specifically their front-seven is outstanding. Plus, new coach Ron Rivera has plenty of coaching experience including making a Super Bowl while New York’s Joe Judge has never been a head coach.

Despite all of this, New York is the safer bet to finish better between these two teams because of one key area. The Giants are much more stable at the quarterback position than does Washington. Daniel Jones flashed signs of brilliance in his rookie year despite having to navigate many injuries to his offensive playmakers. Meanwhile, Washington does not appear sold on Dwayne Haskins just yet given how much they were rumored to be interested in signing Cam Newton. New York’s playmakers such as Saquon Barkley, Sterling Shepard, Golden Tate, Darius Slayton, and Evan Engram are a lot more inspiring than Washington’s Adrian Peterson, Terry McLaurin, Steven Sims Jr., and Logan Thomas.

Both teams have offensive line concerns after Trent Williams landed in San Francisco and Nate Solder opted out of the season. However, Washington’s offense should be one of the league’s worst. For my money give me the Giants to finish third as they appear much more apt to move the ball and put points on the board, even if they may give up more as well.