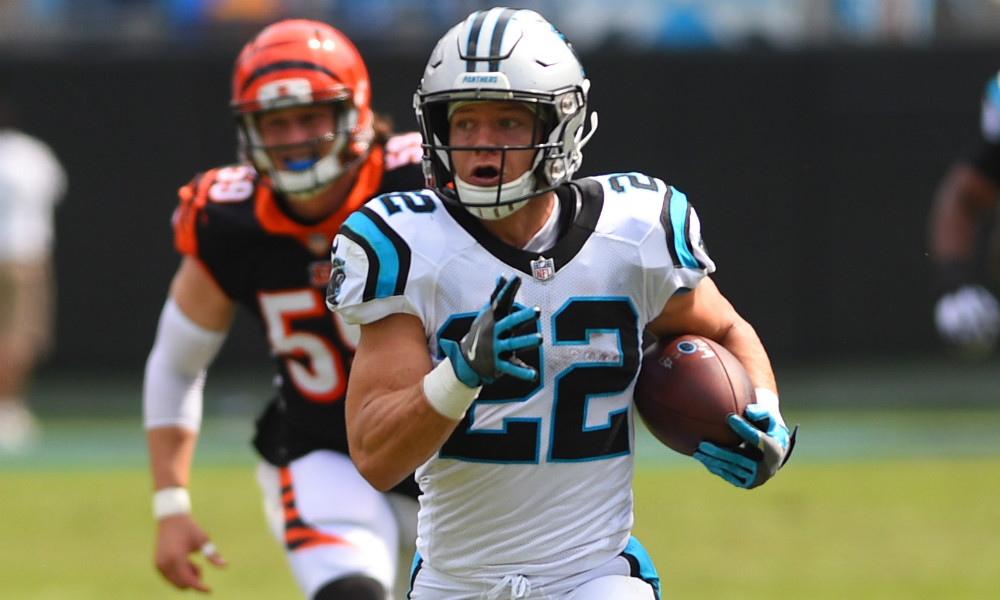 Boy, was last week a fun one to watch. We saw the Titans beat up on the Patriots, the Saints lay it on thick against the Bengals, the Browns get another victory, and the Raiders continue to show us why they are bar none the worst team in football right now. This week we start things off with a pair of teams that are generally among the top in the league, but find themselves at or below .500 in the Packers and Seahawks, we have a rematch of last year’s AFC Divisional game with the Steelers and Jaguars, and wrap things up with a battle of two 8-1 teams who are no longer playing in Mexico City.

Packers vs Seahawks (-3)
Weather: 50 Degrees 15% chance of rain
The Packers finally got back in the win column with a choice matchup at home against the Dolphins. They properly handled their business on their way to a 31-12 victory. The Seahawks are coming off of back to back losses. However, those losses were against the 8-1 Rams and 7-2 Chargers. Now the Packers go on the road in a short week against one of the toughest home crowds to play against. The Packers have won three in a row against the Seahawks in recent years. Those were a different caliber of Packer team, though, as we’ve seen the Packers struggle more than once this year. Overall I would say these teams are pretty similar so I’ll take the home field advantage and lay the field goal worth of points.

Texans vs Redskins (+3)
Weather: 46 Degrees no chance of rain
The Redskins may be 6-3, but they are by far my least favorite six-win team around. Their defense is solid, and as long as they come to play they can win games. The problem is they can’t play from behind in the least bit. The Texans are coming off a bye week having won six straight heading into it. The Texans may have lost Will Fuller for the season, but this week they should be getting Keke Coutee back to go along with DeAndre Hopkins and the recently acquired Demaryius Thomas. It will be interesting to see how much Thomas has integrated into this offense over the course of the bye week. Ultimately, the Texans are a team that can get the ball in the end zone, and I don’t believe the Redskins will be able to contain them enough to keep Alex Smith and company within striking distance.

Bengals vs Ravens (-3.5)
Weather: 43 Degrees 2% chance of rain
Since 2013 the Bengals have had the Ravens number going 8-2 in that time. However, in the last two years, these teams have gone 2-2 in their matchups. The Bengals will likely continue to be without A.J. Green while the Ravens have a huge question mark as to who will be their quarterback. One advantage the Ravens do have in that situation is they have three very distinctive quarterbacks with different styles of play so it will be tough for the Bengals to game plan for them all effectively. Regardless of who starts at quarterback, though, I do not believe the Bengals have the offensive firepower without Green to get past the Ravens defense on the road. I’d expect a hard-fought game with the Ravens winning by a touchdown.

Titans vs Colts (-2)
Weather: Dome
The Titans started the year hot, to the point where I started to believe they were actually a good team, then they lost to the Bills to start a three-game losing streak. Now since their bye week, they’ve beaten a good Cowboys team and the Patriots. The Colts entered their bye week on a three-game winning streak against the Bills, Raiders, and Jaguars. The Colts have not lost to the Titans when Andrew Luck is under center in 10 appearances. This game will ultimately be decided by which Titans team shows up in Indianapolis. Will we see the secondary that shut down the Patriots? Will Marcus Mariota keep up the high level of play we’ve seen that last two weeks? I think that Titans are a team that can play up with the best of them when all things are clicking, but they can also look inept at times. With that, I’ll take the consistency of the Colts and lay the small point total with the home team.

Steelers vs Jaguars (+5.5)
Weather: 72 Degrees 3% chance of rain
The Jaguars beat the Steelers twice last season, once early in the year and then again in the AFC Divisional round of the playoffs. While the Steelers started off the year not looking their best, they have since been on a five-game winning streak with three of those being against divisional opponents. They hit five when they absolutely trounced the Panthers on Thursday night. The Jaguars have been the complete opposite. After starting 3-1 they’ve now lost five in a row and some games haven’t been close. They did get Leonard Fournette back last week, but that wasn’t enough for them against the Colts. They may have home field advantage, but this is not the Jaguars team we saw last year. I expect the Steelers to continue running on all cylinders on their way to another cover with the extra time off.

Panthers vs Lions (+4)
Weather: Dome
For a minute it looked like the Lions were going to make a run in the wildcard race at the very least, but after wins against the Patriots and Packers, along with a close loss on the road to a good Cowboys team, they’ve been trounced by the Seahawks and Vikings. Kerryon Johnson may have given them a semblance of a run game, but now it looks like they’ve forgotten how to sling the ball around. They traded away Golden Tate and Marvin Jones Jr. is looking questionable for this week. The Panthers are coming off a trouncing from the Steelers, and I would imagine them to be hungry for a win. The other piece to watch is the Lions don’t have anyone who can cover Christian McCaffrey out of the backfield. I’ll back the Panthers to win by at least a touchdown.

Cowboys vs Falcons (-3.5)
Weather: Dome
There is a lot going against the Cowboys in this one. The Cowboys have not won back to back games all year. The Falcons are always considerably better at home than on the road. Julio Jones is finally getting in the end zone. The Cowboys have been getting better as the year has gone on, and so far Amari Cooper has helped open this offense up even if only slightly. I wouldn’t say the Cowboys are going to win this game, but I do believe they have the personnel to slow down the Falcons offense and keep it close. If the line was only a field goal I’d be more willing to go for the Falcons, but that half point is the difference maker for me.

Buccaneers vs Giants (-1.5)
Weather: 47 Degrees no chance of rain
This has to be by far the least enticing game of the early slate. The Buccaneers are 3-6 with two of those wins coming to start the season when Ryan Fitzpatrick was playing the part of Fitzmagic. The Giants are just 2-7, but they managed to go on the road last week to beat another bad team in the 49ers. The Buccaneers offense is more explosive, but the Giants are a little more consistent. The Buccaneers defense can’t stop anyone, while the Giants defense isn’t much better, but at least it’s only below average. These two teams aren’t too far off, but I’d say the Giants have the better form right now and home field advantage, so I’ll give them the slight lean.

Raiders vs Cardinals (-5)
Weather: Dome
The 1-8 Raiders and the 2-7 Cardinals go head to head. The 2018 Raiders are one of the most inept teams I can recall in my lifetime. Sure, the Lions were really bad for a stretch and the Browns are seemingly always bad, but they’d at least be a tough out most weeks. The Raiders don’t look like they are capable of winning a football game at this point in the season. They’ve traded away or cut most of their more talented players, and offer next to nothing in terms of scheme. The Cardinals had a rough start to the season but have started to come into their own with new offensive coordinator Bryon Leftwich. The Raiders have scored more than 10 points in just one of their last five. The Cardinals have been playing better on both offense and defense. Lay the points with the home team.

Broncos vs Chargers (-7)
Weather: 72 Degrees no chance of rain
Since 2012 the Broncos are 10-2 against the Chargers. Though, both of the Chargers wins have come at home in the past two seasons. This 2018 Chargers team is one of the best we’ve seen since the days of LaDainian Tomlinson. The Broncos continue to play tough football, especially against divisional foes. Prior to the Broncos bye week, they lost to the Chiefs by just three. I’d have a hard time saying the Chargers are better than the Chiefs and home-field advantage has been nonexistent for the Chargers. I fully expect the Chargers to win, I just don’t think it’ll be by more than a touchdown.

Eagles vs Saints (-9)
Weather: Dome
Nine points is a big number to give up for an NFL matchup. The Eagles haven’t been dominant this year by any stretch of the imagination but despite their record, I still believe they’re a very good football team. The Eagles did just loose cornerback Ronald Darby, leaving this secondary looking pretty bare. They do still have a top-notch defensive line and the Saints just lost left tackle Terron Armstead for a few weeks. The Saints at home are definitely the better team, but giving up nine points is tough to swallow. I’ll side with the Eagles to keep it close.

Vikings vs Bears (-2.5)
Weather: 26 Degrees no chance of rain
On paper, these two teams look like they’re close to even. Yet when you peel back some layers, it may not be so close. The Bears have looked amazing this year, especially on defense with the addition of Khalil Mack. Mitchell Trubisky is putting up superstar-type statistics right now. Yet this offense has had one of the easiest slates of defenses to face and Trubisky has not been as good as the numbers indicate. On the other side of things, the Vikings have finally gotten it together on defense over the past couple of weeks and should now be considered one of the best in the league. Kirk Cousins has been a very good addition for this team and Adam Thielen and Stefon Diggs are picking apart opposing secondaries. The Vikings have also spent most of the year without Dalvin Cook, but he showed he was ready to go before the bye. With two great defenses on the field, I’ll take the points with the better quarterback.

Chiefs vs Rams (-3.5)
Weather: 76 Degrees no chance of rain
Talk about one heck of a Monday night game. We have two 8-1 teams going head to head. These two teams are similar in so many ways. We have two offensive-minded head coaches who are scheming up something fierce this year. The Rams have Jared Goff, Todd Gurley, Brandin Cooks, and Robert Woods compared to the Chiefs Patrick Mahomes, Kareem Hunt, Tyreek Hill, and Travis Kelce. The biggest differences for these two teams are the Rams have the better offensive line and better defensive line. Throw in home field advantage, and I think that’ll be enough to get the Rams to cover.