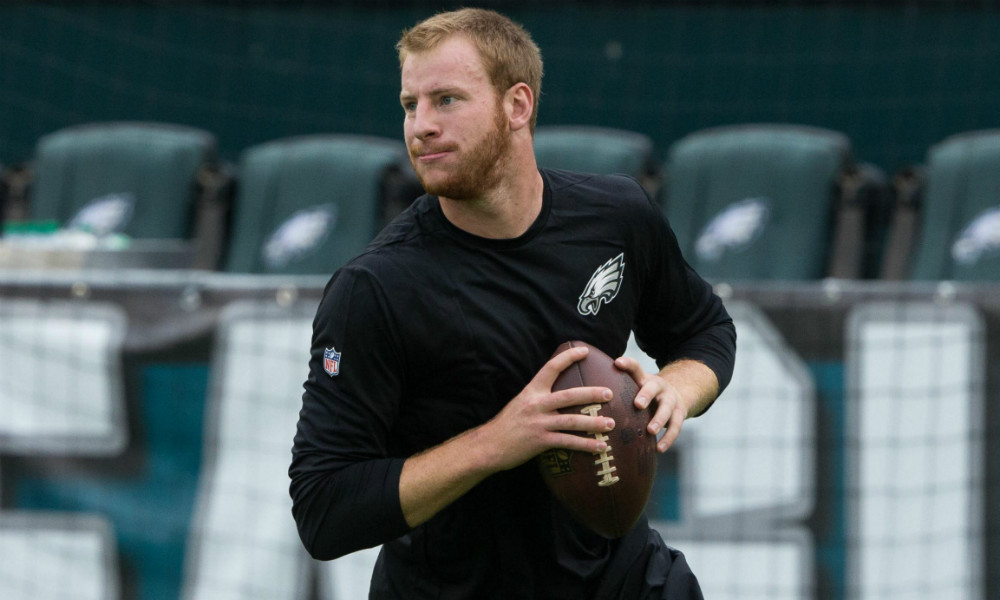 Well, it has taken seven weeks, but some things are finally starting to feel a little normal. The Steelers beat the Bengals, the Patriots are atop the AFC East, and the Saints remain atop the NFC South. However, there are still a number of oddities in the standings. There are three teams tied at 3-3 in the AFC South, no team with more than three wins in the NFC East and NFC North, along with three teams within half a game of first in the AFC North. There are a lot of close division races as we’re 35% of the way through the season. This should lead to a lot of meaningful games as we finish up October and head into November.

Broncos vs Cardinals (+1.5)
Weather: Dome
The Broncos lose a close game at home to the Rams and now head to face a 1-5 Cardinals team. The Broncos defense has now gotten torched in the run game in back to back weeks against the Jets and Rams. Those two teams are good running teams, though, and the Cardinals have not been that, despite having a great running back in David Johnson. The Broncos are definitely not as good on the road, but I do believe the Cardinals are a tier below them. I expect Von Miller to be a difference maker in this one, while Patrick Peterson can only cover one receiver leaving the rest of the group to have some decent days. This game may end up being very close, but with a line that’s close to a pick’em, I’ll go with the Broncos.

Titans vs Chargers (-6.5)
Weather: 55 Degrees 2% chance of rain
This game will be played in London and will start especially early for those of you on the West Coast, which makes this a little unfair for the Chargers in my opinion. It’s tough enough for the Titans who will be feeling like they are playing a game early in the morning, but the Chargers will be playing a game that is the equivalent to 6:30 am for their body clocks. The Chargers haven’t played a game in London since 2008, a loss against the Saints, and for the Titans, this is their first time playing out of the country.

Panthers vs Eagles (-5)
Weather: 51 Degrees no chance of rain
I believe the Panthers are coming to Philadelphia at a bad time. The Eagles defense has slowly been getting better and better each week, and I feel like this defensive line has finally put it all together. This doesn’t bode well for a Panthers offense that is limited on playmakers. The Panthers defense may be stout against the run, but they struggle against the pass, and I don’t believe they have anyone who will be able to shut down Alshon Jeffrey, who has really looked good since his return from injury. Add in home field advantage and I’m expecting a decisive win for the Eagles.

Vikings vs Jets (+3.5)
Weather: 50 Degrees no chance of rain
Both of these teams are coming off of victories against 1-5 teams. The Vikings are the road favorites in this one and that doesn’t surprise me. The strength of the Jets offense is their run game, and the one thing the Vikings have done well on defense this year is defending against the run. The Jets may be 3-3 but I do not believe they are a football team deserving of a winning record. I imagine the Vikings continue to gel, shut down the run, and continue to get Adam Thielen the ball in a road victory.

Bills vs Colts (-7.5)
Weather: Dome
The Bills defense has played very well, and the scrambling ability of Josh Allen had made the offense not completely horrible. However, Allen won’t be playing in this one due to injury and retread Derek Anderson will be starting over Nathan Peterman. Peterman had been dreadful in what little playing time he’s had, so instead they’re going with a journeyman who joined the team less than two weeks ago. Anderson played two games in 2016 for an injured Cam Newton in which he threw for 453 yards, two touchdowns, and five interceptions. He’s probably still a better option than Peterman, but I don’t think the quarterback change will be enough to keep them in this game. I expect Andrew Luck to manage enough offense to cover this spread.

Patriots vs Bears (+3)
Weather: 45 Degrees no chance of rain
At first glance, you’d think the Patriots would be able to handle the Bears, yet when you break it down it really is closer than it might seem. The Bears defense, when at their best, can keep any matchup close. With that said I don’t think I can go as far as saying they’ll win this one. The Patriots have found their stride and once that happens they’re the best team in the league. Expect a scrappy game but for the experience of the Patriots to be the difference maker in the final score.

Browns vs Buccaneers (-3)
Weather: 77 Degrees 2% chance of rain
The Browns defense has been one of the best in the league, but they had a tough go in Week 6 against the Chargers. Winston had his first week as a starter in 2018 with a loss against the Falcons. This game reminds me a lot of the Browns matchup with the Raiders and because of this, I’m projecting this game to be a higher-scoring affair due to the Buccaneers paper-thin defense. While the Browns defense has been solid, I don’t think they have the coverage to hold down the Buccaneers trio of receivers and duo of tight ends. Expect a higher scoring matchup that comes down to the wire.

Texans vs Jaguars (-5)
Weather: 72 Degrees no chance of rain
The Jaguars defense has been a shadow of itself compared to 2017. They’ve still been a good defense, just not the absolute shut down unit it had been. With Leonard Fournette having missed the majority of the season the Jaguars offense has largely been gross, with a couple of great blips of production. The Texans now have a trio of solid receivers with Keke Coutee stepping up with consistent production. I personally don’t believe these two teams are that far off overall right now. While the Jaguars have home field advantage, I don’t believe it’s worth five points. I expect a close divisional game and wouldn’t be surprised if the Texans pull out a win.

Lions vs Dolphins (PK)
Weather: 86 Degrees 1% chance of rain
The Dolphins managed to pull a victory away from the Bears, which was not surprising considering the humidity in Miami last week is a huge advantage for the home team. The Dolphins remain at home and there will still be some humidity this week, but it’s not quite as bad as it’s been the past couple of weeks. The Lions are coming off their bye and should be fresh. The Dolphins defense is undoubtedly better than the Lions, however, I don’t see them having the offensive firepower to keep up with the high-powered Lions offense. I expect Matthew Stafford and company to pull away at some point in this game and get a victory by a touchdown or more as Brock Osweiler struggles to keep up.

Saints vs Ravens (-2.5)
Weather: 52 Degrees no chance of rain
This is a dominant offense facing off against a dominant defense. The Saints have scored 40+ points in three of five games and over 30 in four of five games. The Ravens have scored more than 30 just once, in Week 1 against a Nathan Peterman led Bills. On the flip side, the Ravens have given up more than 20 points just once, while the Saints have done it just twice. I know the Ravens are the home team and the Saints aren’t as electric outside of the dome, yet I have a hard time betting against this offense in an NFL that is so focused on offense. With the Saints defense seemingly playing better after each week and coming off of a bye, I’ll take the points in a game the Saints very well could win.

Cowboys vs Redskins (-2)
Weather: 51 Degrees no chance of rain
These are two very closely matched teams on paper right now. Both defenses have played great, and outside of Washington getting buzz-sawed at New Orleans, they largely shut down opposing offenses. Dallas has done the same, but I believe you can argue that the strength of opposition has been greater for the Cowboys. Then on offense, we have two teams that have been fairly pedestrian. Both rely on the run game and are limited throwing the ball. The difference in this game will come down to play-calling and we finally saw the Cowboys call a game that takes advantage of Dak Prescott’s strengths. That, along with the fact that the Cowboys have owned the Redskins in recent history (8-2 over the last 10) and not having lost at FedEx Field since 2012, gives me the confidence to take the slight road dog who I believe is the better football team overall.

Rams vs 49ers (+10)
Weather: 77 Degrees 0% chance of rain
The Rams are the only undefeated team in the league and are coming off two very tough road matchups against Seattle and Denver before heading to San Francisco for the final game of a three-game road stretch. The 49ers are coming off a Monday night game where they probably should have beaten the Packers. Overall the Rams are the clearly better team, but with all they’ve endured recently, along with Kyle Shanahan being one of the few coaches that can scheme with Sean McVay, I just can’t recommend laying the points in this one. I expect the Rams to remain undefeated, but to win by 10 seems like a tough feat.

Bengals vs Chiefs (-6)
Weather: 43 Degrees no chance of rain
The Chiefs covered a +3.5 spread on the road against the Patriots in Week 6. Now they come home to face a Bengals team that’s played well, but not great football over the past few weeks. While the Chiefs defense can’t stop a nosebleed right now, their offense is close to unstoppable against all but the best of defenses. The Bengals are not the best of defenses, especially on the road in a hostile place to play. If this game was in Cincinnati I’d expect the Chiefs to be a decent favorite, but at home, I just don’t see the Bengals keeping up.

Giants vs Falcons (-6)
Weather: Dome
With this one in Atlanta, expect another shootout. The lowest scoring game so far in Atlanta was 55 against the Panthers, and the other three have all gone over 60, with two going over 70. The Giants offense has not been good this year, but the Falcons defense may be even worse. Good news for the Giants as the Falcons are one of the worst against running backs, making another big game for Saquon Barkley likely. I also expect Odell Beckham Jr. to have a squeaky wheel game here in the dome against a porous defense. While all that is trending up for the Giants, the Falcons are no slouch offensively at home. They’ve scored over 30 points in every home game so far, and I don’t expect that to change in this one. Ultimately, this spread is probably pretty spot on, but I’ll roll with the Falcons to score just enough to cover the spread.