Wow. It’s been a wild lead-up to Super Tuesday — Pete Buttigieg, Amy Klobuchar, and Tom Steyer are out of the race, and Joe Biden earned a dominant victory in South Carolina. It’s looking increasingly like a two-way race between Biden and Bernie Sanders, and both candidates will look to capitalize on tomorrow’s delegate-rich primaries.

Democrats in fourteen different states will head to the polls on Super Tuesday, and PointsBet has posted lines for three of them: California, Minnesota, and Texas. While the sportsbook expects Sanders to win both California and Minnesota handily, they’re a lot less confident about Texas. As a result, that’s where the betting value lies.

The Texas Democratic Party has not always held a traditional primary election. Before 2016, Texas used a combined caucus and primary format dubbed the “Texas two-step,” so we’ve only got one true historical data point.

Hillary Clinton throttled Bernie Sanders in 2016, 65.19 percent to 33.19 percent — an impressive 32 point margin. While tomorrow’s race should end up being much closer, Sanders’ past failure in the state is worth noting. Sanders has not yet beaten his results from 2016 in any state so far, including Nevada, so he’d need to buck the trend to top 33 percent.

Although that tendency suggests Sanders has been unable to expand his base, he has also faced a much more crowded field in 2020, and he’ll have less competition now that Buttigieg, Klobuchar, and Steyer are out. He’ll need to swing some of their voters to win in Texas.

RealClearPolitics’ polling average gives Sanders a narrow lead over Biden. Importantly, he’s still polling below his 2016 numbers, lending credence to the argument that he can’t expand his base. After Biden and Sanders, both Elizabeth Warren and Michael Bloomberg are hovering around the magic 15 percent viability threshold that’s required for either of them to win delegates. In addition, 12 percent of those polled will have to look elsewhere because their candidates have dropped out of the race.

There’s little reason to expect Texas results to mirror the RCP polling average, however. Not only does it include three candidates who have since left the race, but the average also uses numbers from before the South Carolina primary.

So what should we look at instead? Well, FiveThirtyEight’s polling average and prediction model are better designed to handle rapid developments.

Their polling average actually hands Sanders a larger lead, and it shows Bloomberg and Buttigieg with more support as well. But these are still aggregations and adjustments of now-outdated polls, and FiveThirtyEight has even warned about their likely inaccuracy come Tuesday. However, the website’s prediction model holds a bit more water. It aims to correct for candidate dropouts and momentum, which are things that a polling average cannot do as easily. 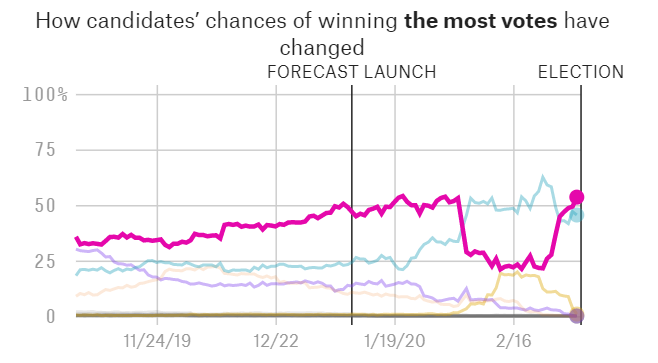 Joe Biden, represented by the dark purple line, has surged above Sanders. The model gives him a 54 percent chance of winning the most votes in Texas, compared to a 45 percent chance for Sanders. Sure, it’s just a model, and FiveThirtyEight has been wrong before, but these numbers are a bit easier to work with than outdated polls.

It still shows a close race: FiveThirtyEight expects Biden to win about 30 percent of the vote to Sanders’ 29 percent, which means it’s a tossup. Their model was pretty good at predicting the two traditional primaries we’ve seen already. It was accurate to within 2.5 percent for the first two candidates in New Hampshire, and while it missed on Biden’s margin of victory in South Carolina by eight points, it still projected Sanders’ results to within 1.5 percent.

Like in South Carolina, PointsBet’s odds are not a great depiction of the race. Here they are for Texas:

They’ve got Sanders as a slight favorite over Biden, who has relatively long odds at +115. That line gives Biden implied odds of 46.51 percent to win, which is close to what FiveThirtyEight projects, but it’s on the wrong side of 50 percent. In contrast, Sanders’ implied odds are 62.50 percent, far from what their model suggests.

Biden’s a must-buy here at +115. The Lone Star State isn’t a lock for him, but he’s got a better chance to come out ahead than Sanders does. Sure, early voting means that recent trends aren’t the end-all, be-all, but Biden should have enough momentum to top Sanders on Tuesday.

I’d lock this one in as a multi-unit play before PointsBet corrects their odds. Late-breaking stories like former Texas Congressman Beto O’Rourke’s endorsement of Biden — alongside Buttigieg and Klobuchar — certainly aren’t factored in yet, so jump on the value while you still can.

Check out all of our articles on sports betting strategy & advice >>

Isaiah Sirois is a featured writer at BettingPros. For more from Isaiah, check out his archive and follow him @is_sirois.