After a few seemingly quiet college football slates, Week 9 is shaping up to be a massive one. From bitter rivals going at it out west to perhaps the most unlikely top-10 showdown in recent memory, this weekend has a little bit of everything. So why not add to the excitement with some college football parlay picks? In honor of this exciting slate of games, we’ve got three featured parlay tickets lined up! All contain exactly three legs as well since 3×3 makes 9. Ahhh, see what I did there?? Alright, alright, let’s get down to business! Read on for the Week 9 plays and commentary on each bet.

All odds taken from DraftKings Sportsbook

Our first parlay for this week gets started late Friday night with the Fremont Cannon rivalry game. Add a pair of hefty favorites out of the Big 12 and Sun Belt on the money line, and we have a nice ticket with +280 odds.

Friday night’s showdown in Reno marks the 47th meeting in football between in-state rivals UNLV and Nevada. The two programs are stark contrasts of one another this season in terms of record. Nevada holds a 28-18 all-time edge in the series and enters at 5-2 but on the heels of a two-point loss at Fresno State. Meanwhile, UNLV is 0-7 and owns the second-longest active losing streak in the FBS.

The battle for the Fremont Cannon is this Friday night.

Since Nevada joined UNLV in the Mountain West back in 2012, the Wolf Pack lead the series 5-4 and the game has been decided by seven or fewer points six different times. pic.twitter.com/c4KB5BDBtA

Both defenses have proven susceptible to allowing yards and points. The Rebels will keep the ball away from Nevada quarterback Carson Strong by featuring star RB Charles Williams. Last year, the Wolfpack covered as a road favorite in Las Vegas, but the margin was 17 points. Since 2011, only once has this rivalry game been decided by 20 points or more. UNLV has been playing teams tough and will undoubtedly show up on Friday as they try to reclaim the Fremont Cannon.

Perhaps people forgot about just how good Matt Campbell’s Iowa State team is after two early-season losses. After efficiently handling Kansas State on the road two weeks ago, they knocked Oklahoma State from the unbeaten ranks last Saturday. West Virginia won last week but did so against a banged-up TCU team. The Cyclones have more talent and have played the better football of these two programs in recent weeks.

After throttling Appalachian State in primetime, Louisiana was fortunate to survive a close game at Arkansas State last week. However, it seems safe to say that the Ragin’ Cajuns successfully averted the letdown spot. Levi Lewis and the stacked UL backfield should have little trouble against a Texas State team that has only two wins on the season.

Our second three-leg college football parlay for Week 9 includes a pick on the total in the World’s Largest Outdoor Cocktail Party. Along with a pair of big money line favorites playing at home, it produces a parlay with +148 odds. 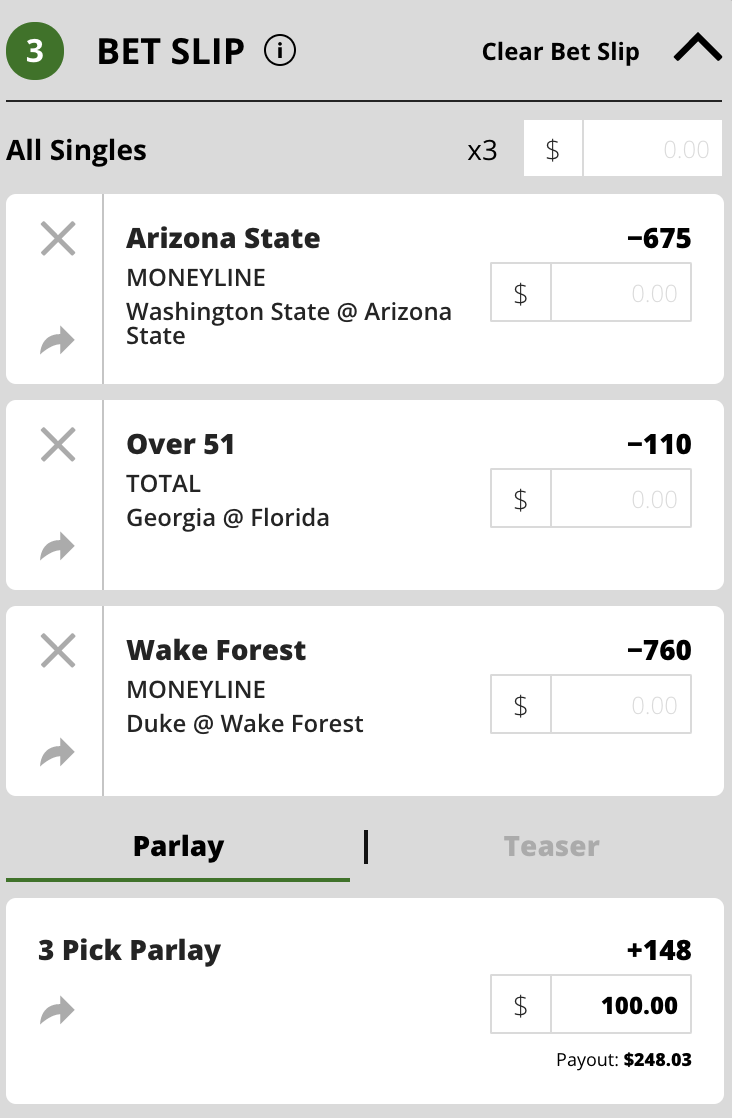 After losing by 16 to Florida last season, one has to believe that Kirby Smart and top-ranked Georgia have revenge on their minds heading into Saturday’s contest. This year’s rivalry game marks the first time the Bulldogs have been favored by 14 points or more over the Gators. However, given that UGA’s defense comes in allowing just 6.6 points per game, taking the over might seem like a contrarian pick.

The largest upset in the series came in 1997 when the Gators were a 20.5-point favorite and were beaten 37-17 by Jim Donnan’s Bulldogs…

In actuality, the total for this game has shot up to 51 after initially opening at 46.5. Georgia’s offense is no longer the ground and pound unit many grew accustomed to. Whether it is Stetson Bennett, J.T. Daniels, or both playing quarterback, the Dawgs should be able to score against a Florida defense that got torn apart two weeks ago by LSU. Similarly, one has to believe Dan Mullen can scheme up a big play or two if the Gators land somewhere between 17 and 20 points minimum, the chances of this game going over will be very high.

The Pac-12 always seems to find a way to cannibalize itself. Just when people were getting excited about Jaden Daniels and Arizona State, the Sun Devils suffered a two-touchdown defeat at Utah. They should have little trouble rebounding at home this weekend against Washington State. Unfortunately, the Cougars receive a power rating downgrade. They continue to deal with the aftermath of firing coach Nick Rolovich and several assistants over a certain vaccination that shall not be named.

Unpopular opinion: Wake Forest running the table, winning the ACC, and qualifying for the College Football Playoff would be a better Cinderella story than Group of 5 heavyweights Cincinnati doing the same thing. It’s still a long shot, but the dream season should continue this week against Duke.

Wrapping up this week’s featured parlays is a ticket with three games scheduled to kick off in primetime on Saturday night. A massive Big 12 underdog plus the points and two more heavy home favorites on the money line produce parlay odds of +129. 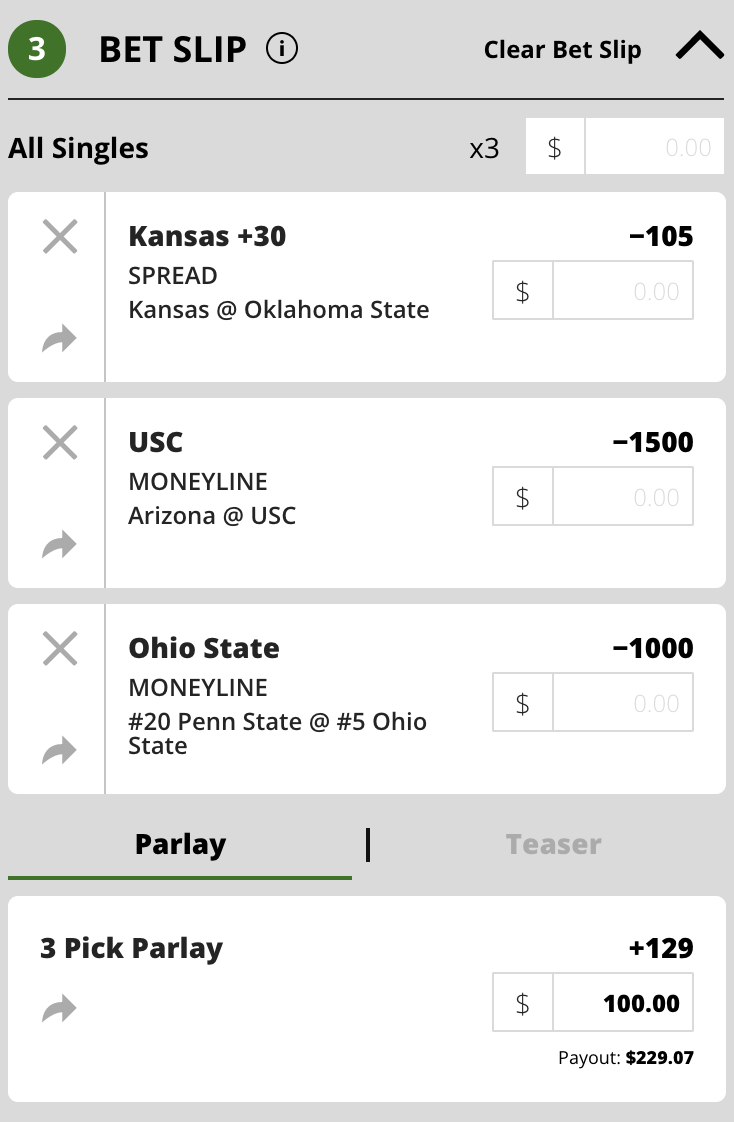 Yes, we are taking Kansas in a college FOOTBALL (not basketball) betting column. The Jayhawks stunned many by taking unbeaten Oklahoma down to the wire last week. Now they travel to Stillwater to face an Oklahoma State team that suffered its first loss last Saturday. Unfortunately, Mike Gundy’s Pokes aren’t quite the force offensively that they have been in years past. Nevertheless, KU should be able to do enough to stay within the 30-point spread.

USC has admittedly lost outright as a home favorite on multiple occasions this season. Is that why Mike Tomlin doesn’t want any booster’s blank check? Meanwhile, Arizona has not won a football game since October 5th of 2019. The last time the Wildcats went on the road, they lost 34-0 to Colorado. Enough said.

While Penn State may have some bite as a slightly undervalued dog ATS, by no means are they expected to go into The Shoe and win outright on Saturday night. Ohio State seems to have found its footing defensively after a shaky start. It may be closer than many anticipate, but Ryan Day and the Buckeyes will get the win.

While the three featured parlays above have been constructed for you, the beauty is that bettors can mix and match to build their parlays as they wish. Not feeling convinced by any of the picks above? Looking to create an even bigger parlay? This section is for you! Below are a few additional college football bets to consider for Week 9. Good luck with all of your NCAAF wagers this week, and enjoy the games!

Whether you’re new to sports betting or a betting pro, our How To Bet and Sports Betting Strategy and Advice pages are for you. You can get started with our 101 section — including How to Bet on Sports — or head to more advanced strategy — like 10 Tips to Become a Sharper Sports Bettor — to learn more.

Henry John is a featured writer at BettingPros. For more from Henry, check out his archive and follow him @HankTimeHenry.